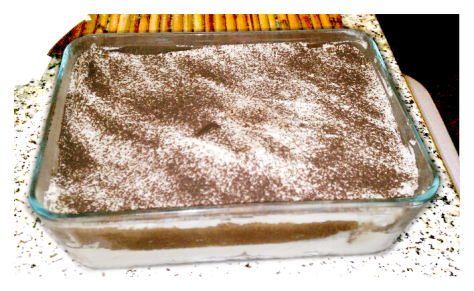 *Sigh* If only I was a better food photographer…

And then I moved to New York, where the sweet little Italian delis were more than happy to serve Tiramisu along with their strong cups of cappuccino. And, I went to Cafe Dante in the Village where the only word I could use to describe the Tiramisu, is divine.

Since I am a strict vegetarian, I couldn’t use ladyfingers or raw eggs (Oh the gelatin thing, just a myth made in my head). So, I substituted ladyfingers with vanilla sponge cake.

I first made the espresso. I used a South-Indian decoction maker and some mild Costa Rican fair trade coffee. I would recommend using stronger coffee in the future. I’ve heard Starbucks VIA is a good coffee to use for the espresso. Once made, I put it in the freezer to chill it while I started working on the cake to susbstitute the ladyfingers with. Frankly, you could get away with making half a recipe of this cake. But it was absolutely delish so I just kept a lot of the cake aside for fun!

2) Sift the flour with the baking powder. Add the sweetened condensed milk, melted butter, vanilla and Kahlua and start whisking the mix. Add warm water and keep whisking until the batter is well aired and of pouring consistency. I used an electric beater for this. Pour the batter into the pan and put it in the oven. After 15 minutes, I lowered the temperature to 325 degrees. It took about 40 minutes to bake the cake. The sure shot test to tell if the cake is done is to poke it with a knife to see if it comes out clean. Once the cake was baked, I left it to cool for almost 30 minutes on a rack.

3) I started beating the whipped cream using the whisk attachment of the beater, slowly adding icing sugar to the mix. I did this till the cream had soft peaks. Overbeating can be disastrous and so I try and be careful not to do that. (Imagine a nervous me, biting a lip and starting intently at the working bowl making sure I’m not beating it a bit too much!). Once done, I put the mix aside in the fridge.

4) I used the same whisk attachment for the beater and beat the mascarpone cheese with the vanilla and Kahlua. The consistency of the cheese should resemble that of the whipped cream. Initially, the cheese will look like it is lumping up, but don’t worry about it. Once done, gently fold the whipped cream with the cheese mix and set aside in the fridge.

5) By now the cake has cooled and is ready to be sliced into pieces to line the serving dish with. First slice away the raised portion of the cake and cut off the sides of the cake (basically, take out any crisp parts of the cake that might hamper with coffee absorption). At this point, you need to decide whether you want to set your Tiramisu in glasses (which look pretty) or in a deep rectangular serving dish. This will dictate the size of the fingers you will cut from the cake. I used the rectangular deep dish as I was carrying the Tiramisu to a friend’s and glasses would have been difficult to manage. In my mind, slicing the cake was also the trickiest part of making the Tiramisu because the thickness of the cake pieces is critical – it should be thick enough to absorb the coffee and Kahlua mix but not so thick that it becomes chunky to eat. I made the mistake of slicing it too thick and for the future, I will ensure I slice the cake into 1.5 cm thick fingers. Given the size of my dish, I sliced it into 1″ wide thick fingers. Just ensure you have enough “fingers” to make two layers.

6) In a shallow plate, put in a few tablespoons of the espresso with an equivalent amount of Kahlua. Dip the fingers in the coffee mix and lay down in the serving dish. Do this quickly so that the cake doesn’t crumble. Spread the cheese mix over this layer. Using a seive, dust this layer with the cocoa powder. Put another layer of coffee soaked cake atop of the cream mix. Spread another layer of the cream mix and dust with cocoa. And now, you’re done! Just chill it overnight in the fridge.

I loved this. I wish I had made the Tiramisu sooner. It was heavy but I think the heaviness could be attributed to the thickness of the cake.

Next time, I’m going to try dousing the cake in marsala wine or brandy instead.

As to my original question – What is Tiramisu? It’s what coffee and alcohol is meant to be, if it were to be eaten and not drunk.

Recipes, experiments and disasters of an amateur baker, baking without eggs.