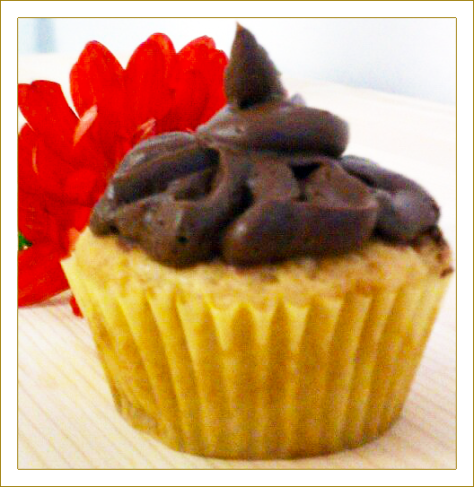 A friend once asked me what I would take with me if I were faced with the acopolypse. I answered,

1. My Mom, because to me she is the epitome of all the goodness and strength in the world
2. My iPad with its accessories, because I couldn’t live without books, movies and some pre-loaded games
3. Some sugar

The last one intrigued him the most. “Why sugar?” Simply because if my world were coming to an end, I’d like a little sweetness to end it with.

The first time I fell in love with cupcakes, it was BEFORE I’d actually eaten one. They just looked beautiful with the colorful frosting holding the promise of bliss, tempered only with a light cake. Needless to say, I had to bake them. But of course, as is ALWAYS the struggle for me, it was hard to find vegetarian recipes that would make the cake light.I scourged the internet for recipes and found a lot of interesting facts about baking vegan/eggless cakes. Facts like eggless or vegan chocolate cakes actually became popular during the war when milk goods were expensive, and vinegar, despite its popular use as a sour and strong addition to salads, is used as a leavening agent in cakes instead of eggs (and it works like a charm!)

But the most fruitful discovery after days and hours of searching was, Chef Chloe (http://chefchloe.com).Chef Chloe’s all of 23 and her vegan cupcake was the first vegan winner of Cupcake Wars! I used her recipe (with very minor tweaks) as the base for all my cupcakes. Upon stumbling (really, check of StumbleUpon’s food inventory!) through some recipes for buttercream frosting, I found a great decadent buttercream frosting recipe from Savory Sweet Life (http://savorysweetlife.com) that I tweaked for my own cupcakes.

As much as I love sugar, I do believe that sugar tastes best when used in moderation. I like how, for example, using lesser sugar than the recipe called for, really brought out the taste of the cocoa powder and made the buttercream frosting extremely rich in flavor without being too sweet. For the cupcakes, too, I used a little less sugar than the original recipe called for, ensuring that the vanilla wasn’t overridden by sweetness.

For the cupcake (makes 6)
3/4 cups all purpose flour
1/2 cup sugar
1/2 tsp baking soda
1/4 tsp salt
1/2 cup milk (Chef Chloe recommended soy or rice milk or water, if you want to make this cake vegan)
1/4 cup vegetable oil
1 tsp vanilla essence
1 tbsp apple cider vinegar (If you do not have any, you can use regular vinegar. I’d all a little more sugar and if required, essence, to compensate though)

Cupcakes:
1. Preheat your oven to 350 degrees (Farenheit) and line a cup-cake tin
2. Sift together flour, baking soda, salt, sugar in a bowl
3. In a separate bowl, whisk milk, vinegar, oil and essence
4. Gently fold in the wet mixture into the dry mixture
5. Whisk the mixture and pour into the cupcake liners, 2/3rd of the way
6. Place it in oven and bake for 15 – 20 minutes, or until a knife or toothpick inserted into the cake comes out clean

Frosting:
1. Gently cream the butter with a beater
2. Add the sifted sugar and cocoa and beat on a low speed till mixed
3. On a medium speed, add the salt, essences and whipping cream
4. Beat on a high speed till stiff peaks form

Frost the cupcakes with the buttercream and store in the fridge.

The result of this baking was far better than anything I had imagined. The cupcakes are extremely moist, light and fluffy (and they stay that way 2 days later too!) and the buttercream frosting has been a great hit at both parties I’ve served these cupcakes at. Rest assured, I will keep experimenting with this recipe with hopefully equally good results for strawberry cupcakes, peach and vanilla cupcakes, and since the Santa Rosa plums from the farmer’s market are simply to die for, maybe some chocolate-plum cupcakes 🙂

When I was young, I thought Life: A User’s Manual would teach me how to live and Suicide: A User’s Manual how to die. I don’t really listen to what people tell me. I forget things I don’t like. I look down dead-end streets. The end of a trip leaves me with a sad aftertaste the same as the end of a novel. I am not afraid of what comes at the end of life. I am slow to realize when someone mistreats me, it is always so surprising: evil is somehow unreal. When I sit with bare legs on vinyl, my skin doesn’t slide, it squeaks. I archive. I joke about death. I do not love myself. I do not hate myself. My rap sheet is clean. To take pictures at random goes against my nature, but since I like doing things that go against my nature, I have had to make up alibis to take pictures at random, for example, to spend three months in the United States traveling only to cities that share a name with a city in another country: Berlin, Florence, Oxford, Canton, Jericho, Stockholm, Rio, Delhi, Amsterdam, Paris, Rome, Mexico, Syracuse, Lima, Versailles, Calcutta, Bagdad.

I believe the people who make the world are the ones who do not believe in reality, for example, for centuries, the Christians. There are times in my life when I overuse the phrase “it all sounds pretty complicated.” I wonder how the obese make love. Not wanting to change things does not mean I am conservative, I like for things to change, just not having to do it. I connect easily with women, it takes longer with men. My best male friends have something feminine about them. I ride a motorcycle but I don’t have the “biker spirit.” I am an egoist despite myself, I cannot even conceive of being altruistic. Until the age of twelve I thought I was gifted with the power to shape the future, but this power was a crushing burden, it manifested itself in the form of threats, I had to take just so many steps before I got to the end of the sidewalk or else my parents would die in a car accident, I had to close the door thinking of some favorable outcome, for example passing a test, or else I’d fail, I had to turn off the light not thinking about my mother getting raped, or that would happen, one day I couldn’t stand having to close the door a hundred times before I could think of something good, or to spend fifteen minutes turning off the light the right way, I decided enough was enough, the world could fall apart, I didn’t want to spend my life saving other people, that night I went to bed sure the next day would bring the apocalypse, nothing happened, I was relieved but a little bit disappointed to discover I had no power.

—Translated from French by Lorin Stein

Best known as a photographer, Édouard Levé was also the author of four works of prose: Oeuvres, Journal, Autoportrait, and Suicide, the last of which he finished days before he took his own life, in 2007, at the age of forty-two. Levé wrote Autoportrait—the source of these pages—in 2002, while he was traveling across America, taking the photographs that became “Série Amérique.”

Thank you, D, for sharing.

Recipes, experiments and disasters of an amateur baker, baking without eggs.